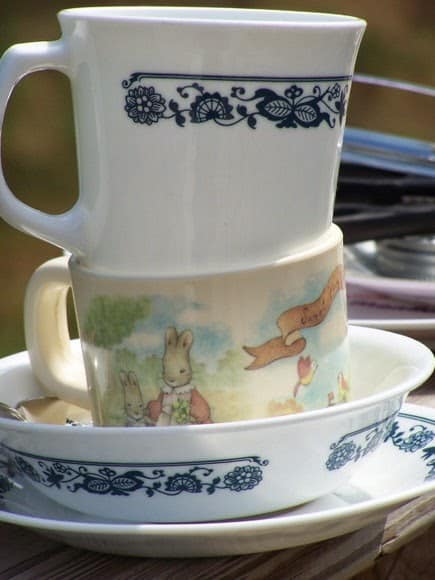 I’ll explain about the bead in Ezra’s nose in a minute…But regarding life with no air conditioning, ten days ago, I woke up to lightning flashing outside our bedroom window.  The thunder was very loud, and right after this the air conditioner went off.  We have an underground heat pump, and somehow lightning struck both the air conditioner and our phone line (so we were without phone or internet also).
The phone company was able to fix the phone line by that afternoon, but a visit from the air conditioner repairman left me feeling a bit down.  He said there was a special part he needed to order and we would be without central air until it came in the following week.  And it was already close to 100 degrees outside.
Since we live in a split-level ranch, our main floor is upstairs, where it tends to be hottest.  The humidity was over 70%.  We decided to sleep in the small finished part of the basement, where it was a bit cooler.
In the evening we ate some meals on the deck, if it was cooler there.  We also ate breakfast outside sometimes. 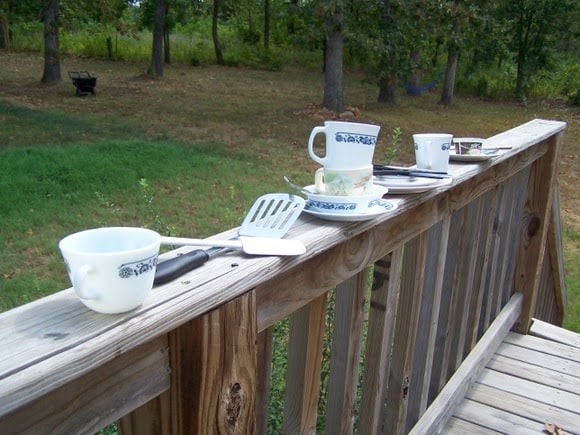 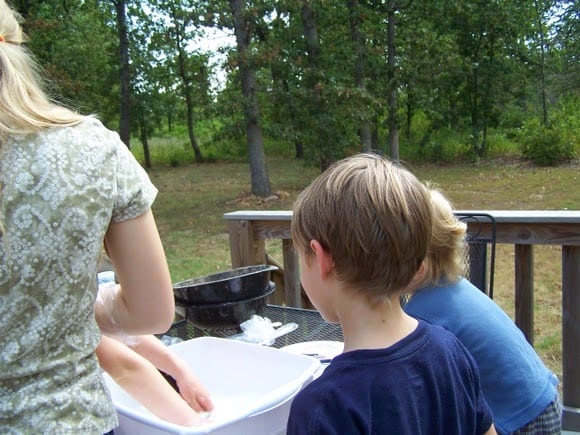 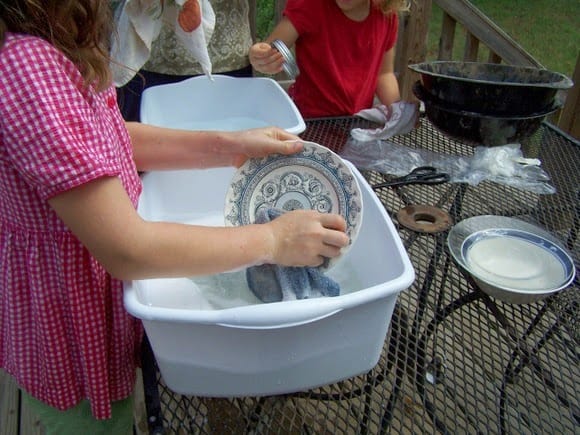 These photos of washing dishes outside are actually from a couple of weeks ago when our kitchen sink was broken, and we had to wash dishes on the back porch for over a week. 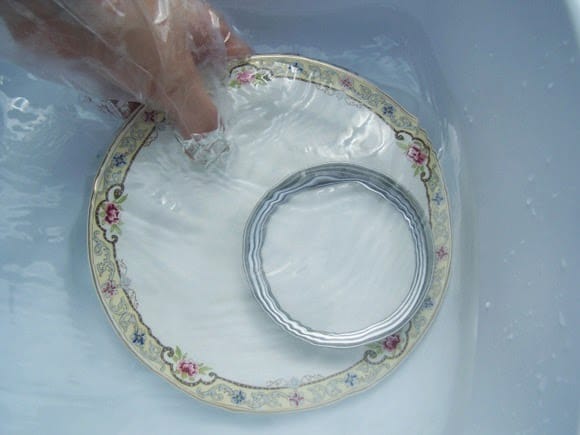 After two nights of sleeping in the very stuffy basement with about five fans going, we decided we would have to break down and buy a window air conditioner, even though we really couldn’t afford it.  We mentioned this on Sunday to some friends, and they said they “just happened” to have a new air conditioner in its box, sitting in storage.  The husband had found it at a garage sale.  We were so thankful!
We had moved all of the twin mattresses to the basement and also borrowed an inflatable mattress from my parents.  We’ve been sleeping all together in the basement for 10 days now.  The kids think it’s one big party. It’s funny how inconveniences don’t seem to bother them. 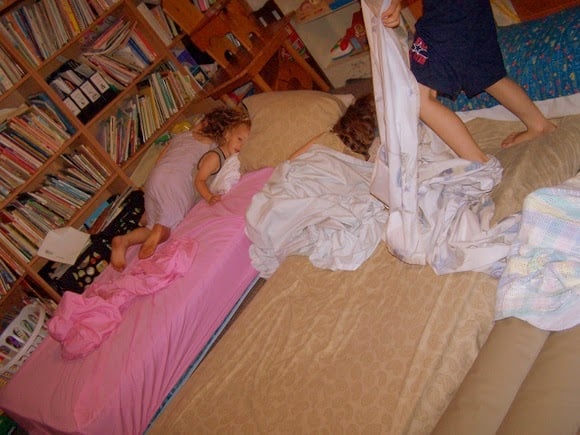 We have an old folding table downstairs where we eat some meals if it is too hot outside.  After getting 9 mosquito bites (despite the use of a citronella candle) during our meal a few nights ago, I’ve decided we should just eat inside.  🙂 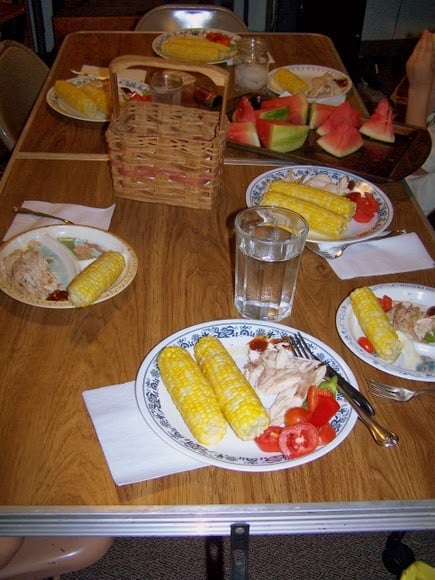 After many nights of less than optimal sleep, my husband and I aren’t feeling like our usual selves.  Then, on Thursday, Ezra was sitting on Daddy’s lap when he said to me, “Mommy, I can’t get my bead.”  He was pointing to his nose, so I looked, and sure enough he had a little pony bead stuck in there.
We spent literally hours trying to get the bead out of his nose.  We tried having him blow his nose, we had him smell some pepper to get him to sneeze, we tried a technique used by doctors that we found online.  All to no avail.  After several hours, we had to admit that we needed help.  We went to a doctor, who was very kind.  He was a former pediatrician, and so gentle with Ezra.  It took him about five seconds to remove the bead with a small pair of forceps.  The worst part was that two nurses had to hold Ezra still, and he didn’t like that, but they were very kind and it literally only took seconds.
So, several hours and $71 later, we returned home, where my mom was watching the older children.
On the way home, a small voice from the back seat said, “Mommy, I want my bead.”  I couldn’t believe that after all that he had been through, he still wanted it!  It was kind of funny after the fact.  I was not amused while we were going through it, however!
The blessing of all these minor trials is the extra time we’ve spent together.  I’m sure we’ll all remember this time camping out in the basement together.  I always plan to eat meals outside and it usually doesn’t happen.  This forced me to get outside. 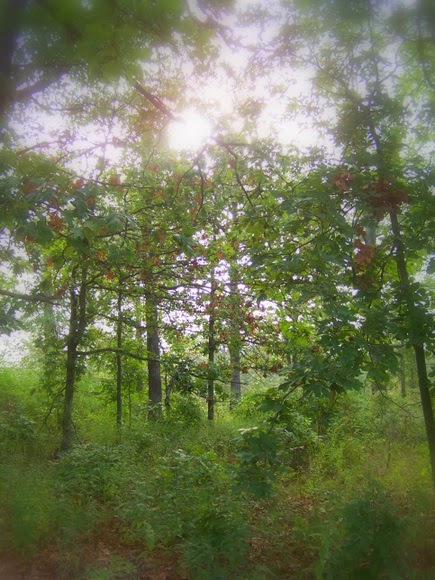 In the middle of all this, we celebrated Ezra’s 2nd birthday, and I finished sewing this skirt for Abigail: 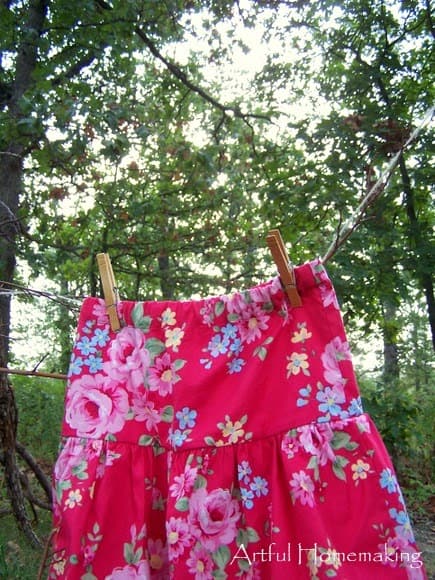 I’m really hoping that our air conditioner will be fixed soon.  It has been so hot upstairs (literally 100 degrees on the hottest days) that we haven’t been able to function normally.  I’ve put off starting school until September 1st (that’s my “Lord willing plan” anyway!).
So, anything exciting going on at your house?  🙂

Food In My Freezer
Loving the Little Years