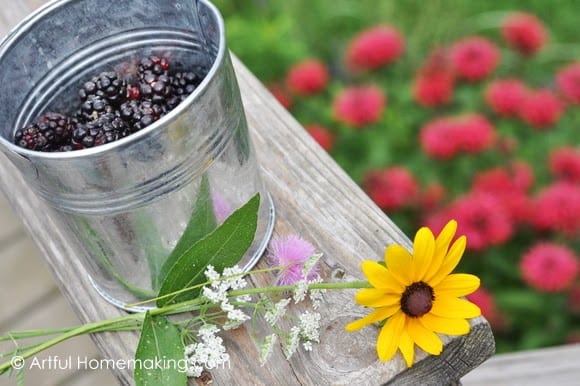 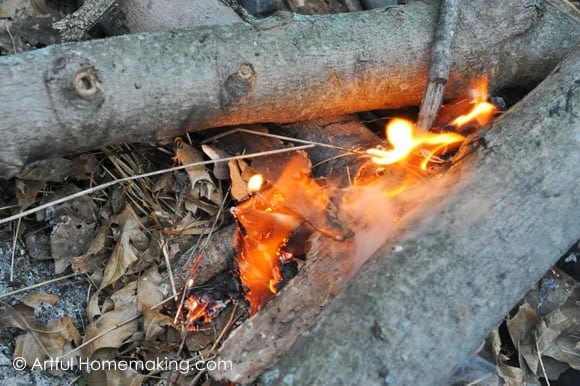 We began our summer break in May, with a family camping trip that created happy memories for all of us. We hiked, fished, cooked on the campfire, roasted marshmallows, and just enjoyed being together. 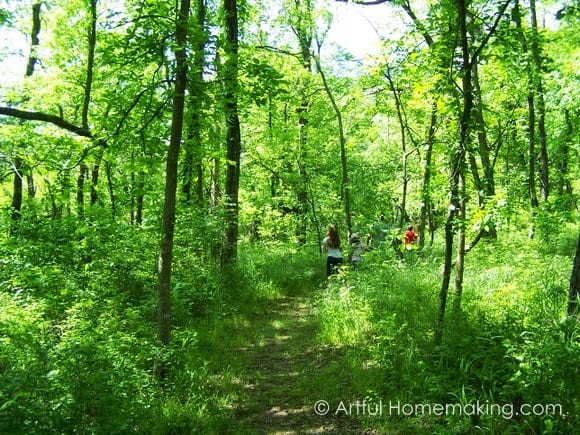 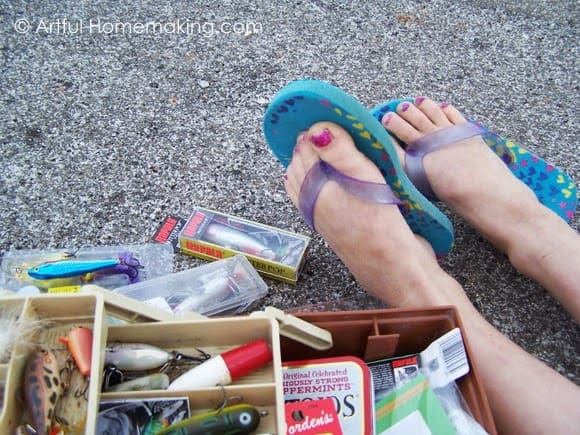 We got three baby bunnies at the end of April, and my husband and children put together this wooden hutch for them.  We had thought they were all sisters, but after a month or two, it became apparent that my favorite little black and white one (named “Oreo”), was not a sister, but a brother, and he would have to go.  So, we gave him to some friends who were wanting a male rabbit.  We were kind of sad to see him go! 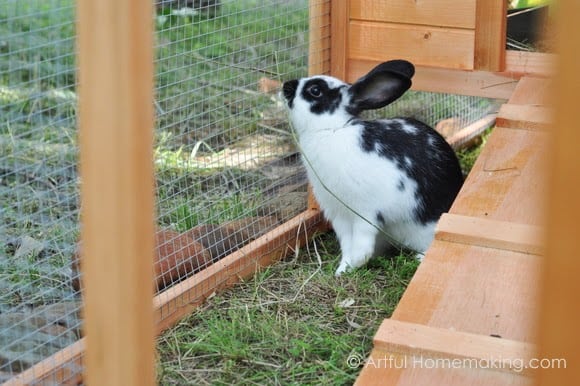 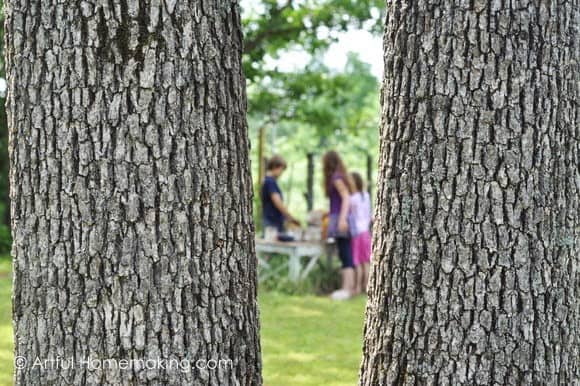 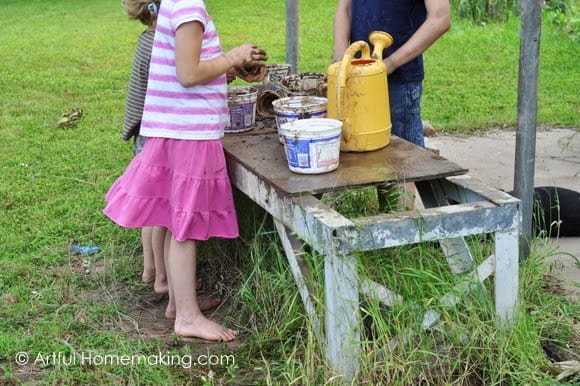 Many happy hours were spent in the outdoor play kitchen, making mud pies, breads, and donuts. 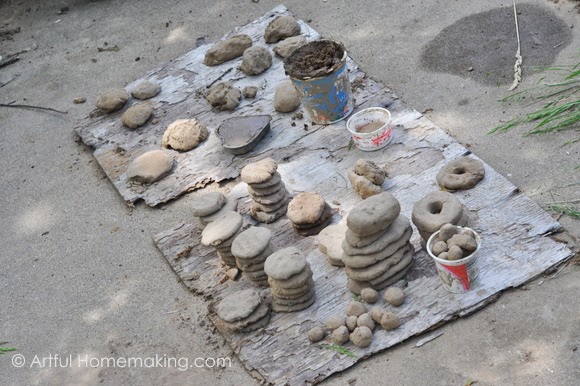 Using cast-off building materials, the younger children made a little house and garden of their own.  I love the fact that they’ve had so many hours just to imagine, create, and explore outside. 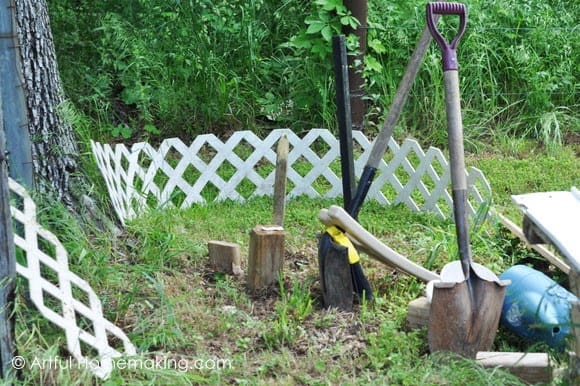 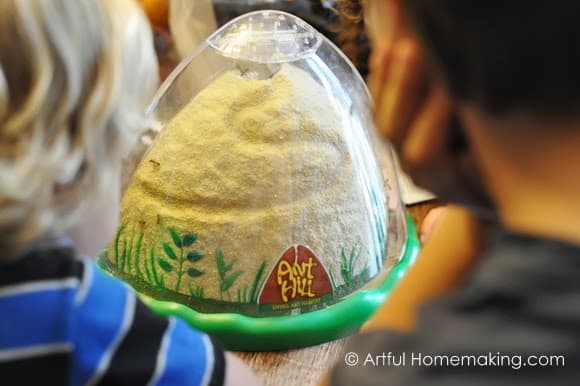 We also brought a little bit of nature inside, by observing some ants for a few weeks.  We’ve done this before, but the younger ones were too little to remember it. 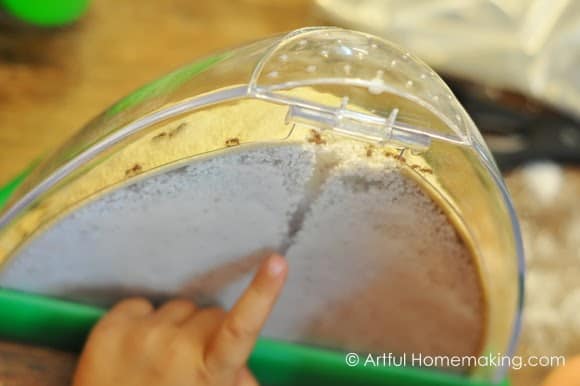 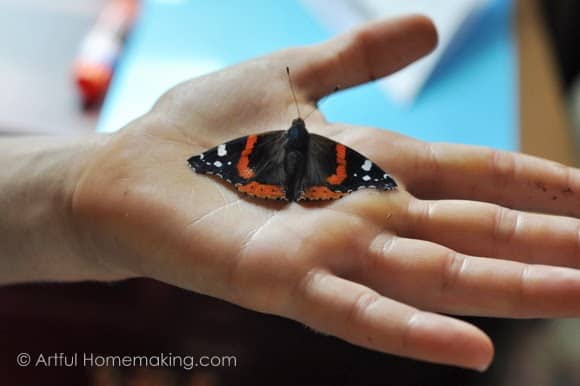 I always share the kitchen with my children, but this summer my 11-year-old daughter spent a lot of time making all sorts of delicious treats. Her siblings really enjoyed sampling her creations.  We’re still working on cleaning up the mess after the fun of cooking is over, though! 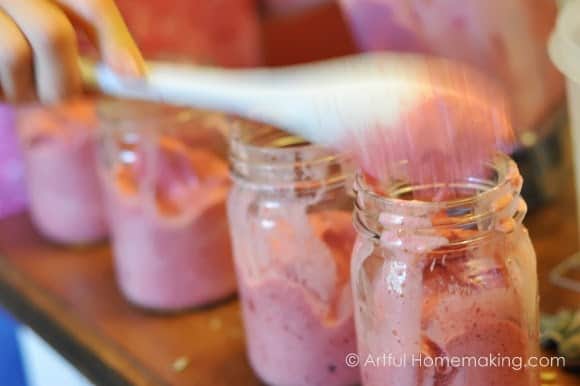 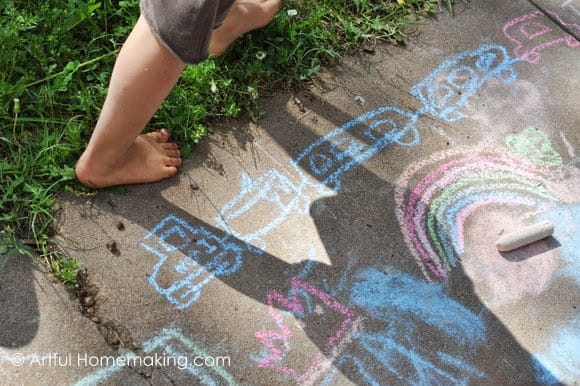 I was actually able to finish some of the books on my reading list, which was a nice accomplishment. 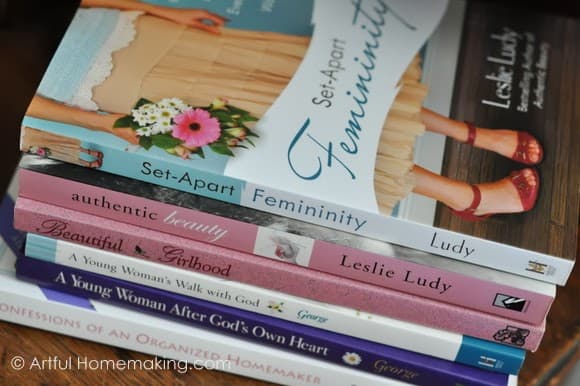 (Some books we found at the used bookstore.) 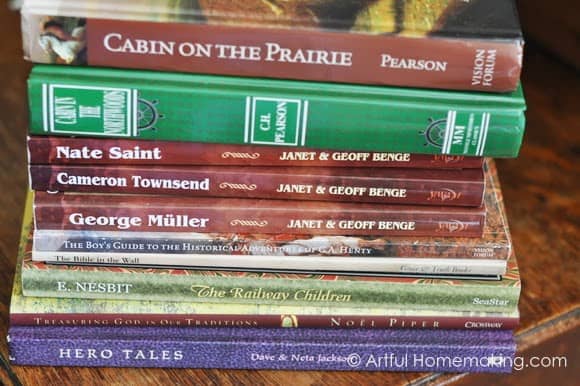 I also finished a few quick sewing projects for the girls.  It wasn’t as much as I was hoping to accomplish, but it was a start. 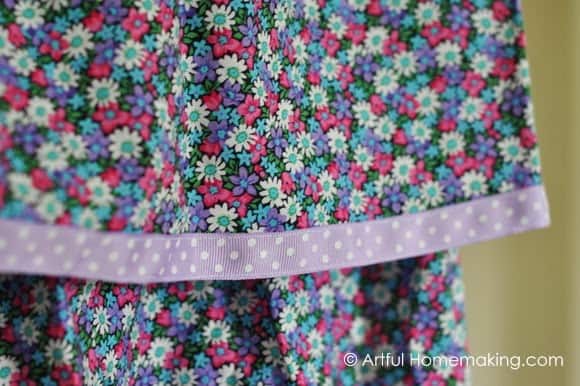 I made some herbal tinctures that I plan to store away for the coming cold and flu season: 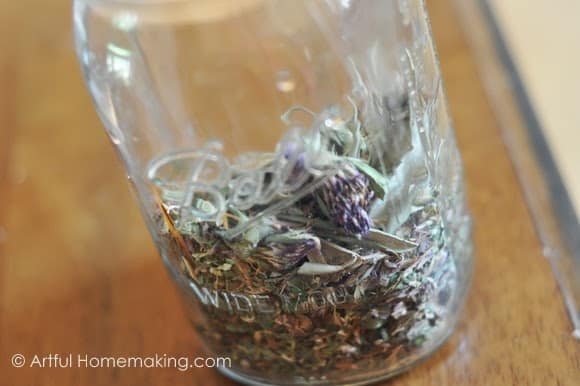 My oldest daughter finished this little cross stitch just days before the 4th of July.  We had our annual celebration here at our house, and it was fun to be able to decorate with it. 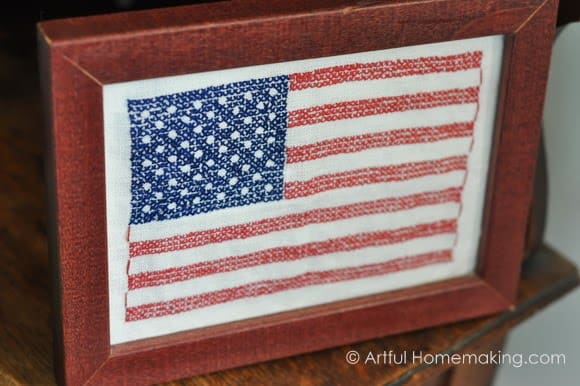 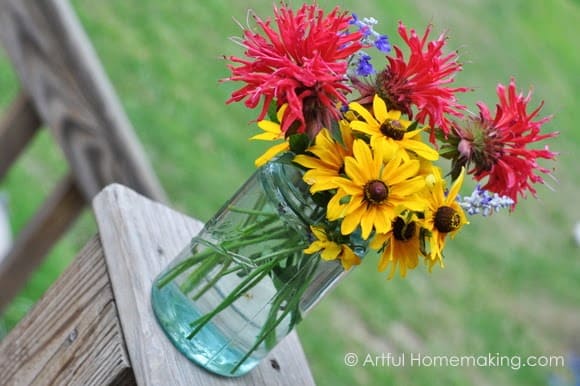 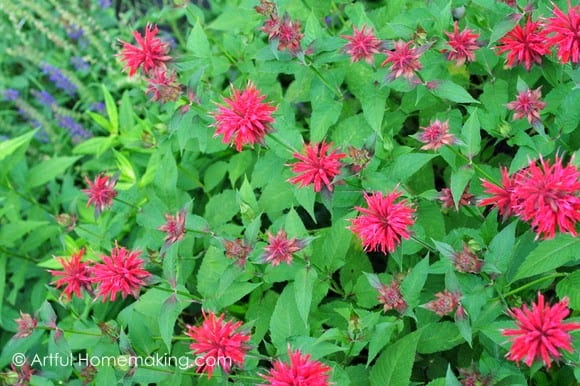 Every year the Bee Balm blooms around the 4th, and I think the flowers look like bright fireworks. 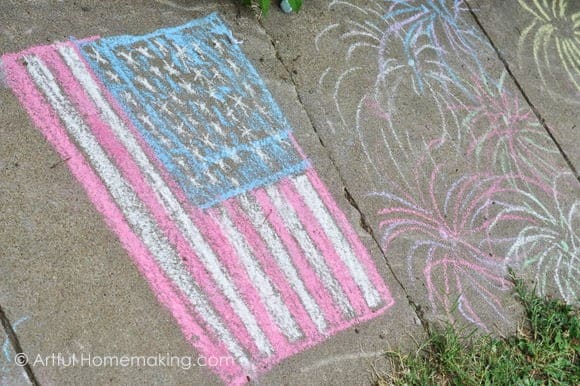 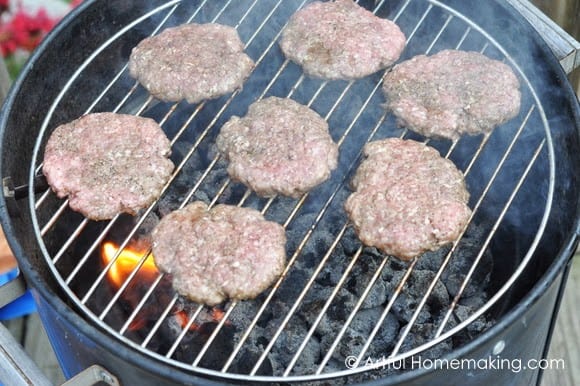 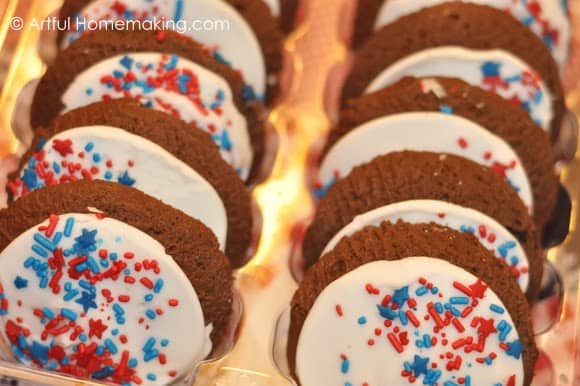 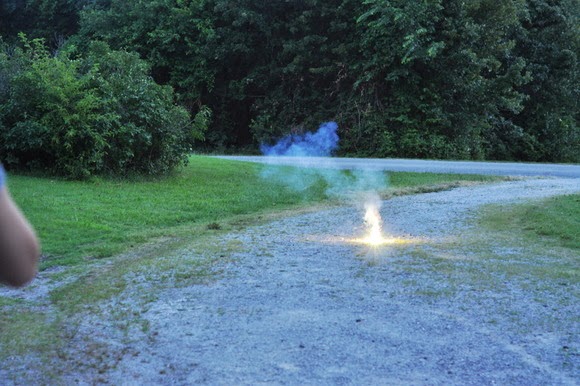 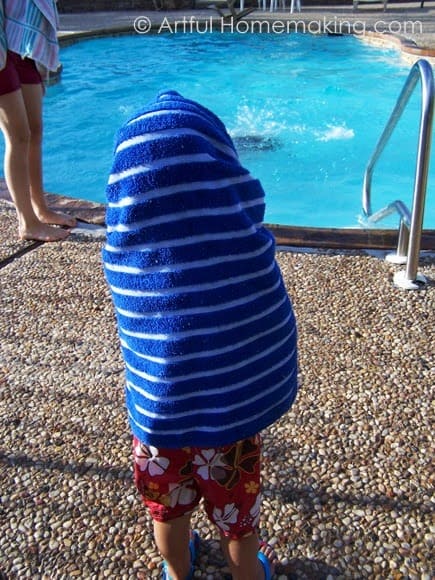 We’ve spent as much time swimming as possible.  And when we couldn’t swim, we made good use of the sprinkler!
I know that technically summer isn’t over yet, but most of our major summer events with friends and family have come and gone, and I’m turning my attention to the new school year, which we plan (Lord willing) to begin in a few weeks.  Everyone continued on with their math through the summer, and my oldest daughter worked on her other subjects, also, as she likes to be ahead, but we’ll begin with new books for many of the other subjects.  I’m looking forward to sharing our new curriculum choices and school setup soon! 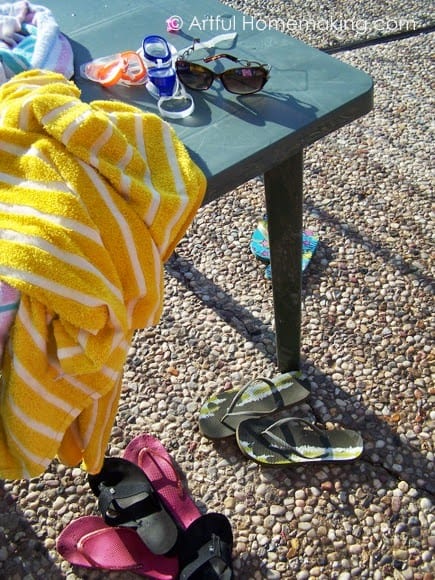 I also had a not-so-fun part of the summer, and that was finding out that I might have Lyme disease.  After experiencing overwhelming fatigue, brain fog, headaches, joint pains, and other symptoms of the disease, we began to feel a growing concern that I might have it.  I’m still waiting on some technical details (including financial ones) before pursuing testing.  In the meantime, we began treating it naturally, and overall I started feeling so much better.  I’m so grateful for the prayers of friends and family, as all glory for every good day goes to God!  I cling to Him for strength and wisdom for each new day!